On the second day of the three-day competition, Hanna, a 16-year-old Elgin Park Secondary student, took top spot in the youth boys 400-m, clocking a time of 48.74 seconds.

It was the first time Hanna – who was one of three Ocean Athletics athletes to represent Team BC – had run the event in under 49 seconds.

“That was a pretty great moment for me. It’s what I had been working so hard for all summer, to get under 49,” he said.

Hanna was the second-ranked runner heading into the event – behind Ontario’s Cameron Nurse – but the South Surrey runner, knowing he’d be running against the wind, paced himself until the end, when he made a final kick.

“I knew there was going to be a pretty strong headwind – there usually is in Langley – so I saved a bit for the end and made a late push,” Hanna explained.

Hanna won by a few metres, with London, Ont. runner Davis Edward finishing second, in 49.27 seconds, and Nurse third, in 49.28.

Ocean Athletics head coach Maureen de St. Croix was thrilled to see Hanna clock a sub-49-second run, adding that it “puts him in a pretty rare group” of runners his age.

“It’s been just a tremendous season for him,” said de St. Croix. “And he’s just such a wonderful kid. No matter what he does, he’s always just the same old Jake – except that just keeps running faster and faster.”

Ingvaldson, a student at Lord Tweedsmuir Secondary who, like Hanna, competed for Team BC, also had a stellar weekend in Langley, winning three medals – including one gold.

Ingvaldson struck gold in the shotput, capturing a Canadian youth title with a personal-best throw of 16.15 m.

Ingvaldson also found himself on the podium in the Legion’s other two throwing events, winning bronze in both the discus – with a toss of 49.99 m – and the hammer throw, in which his best toss travelled 53.55 m.

“It was just an excellent meet for everyone,” said de St. Croix. “The Legions will be back in Langley next year, so whether our athletes won medals or not, it’s a great experience and they’ll be even more prepared for next year.” 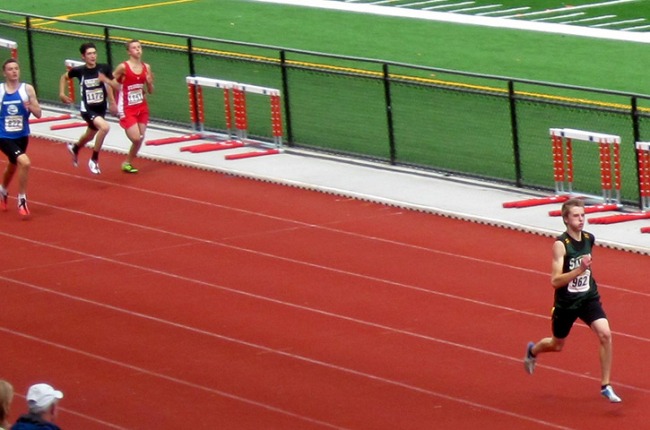 Photo courtesy of Ellenwood family (from June BC HS Champs)

LANGLEY TIMES – Mission accomplished for Dean Ellenwood. Heading into the Canadian Legion track and field championships over the weekend, the 15-year-old from Langley was intent on finding the podium.

“My goal was to medal in my events, but I really wanted to win the 800m,” he said. “That is my speciality event and there was some big competition and I wanted to prove that I could.”

And Ellenwood, who was representing the Langley Mustangs Track and Field Club, delivered, winning the 800m race and adding a silver in the 300m. Ellenwood was competing in the midget (U16) division.

He won gold on Sunday, the final day of the three-day championships which were held at Langley’s McLeod Park. The championships brought together close to 1,000 track and field athletes between the ages of 12 and 17. The event will again be held at McLeod Park in 2014.

In his gold-medal victory, Ellenwood crossed the finish line in 1:56.12, which was more than a full second ahead of Ezana Wossen of Centro Scuola, a track and field club out of Toronto. Taking bronze was Team Quebec’s Najib El Andaloussi.

On Saturday, Ellenwood was second across the finish line in the 300m race with a time of 36.67 seconds. The gold medal went to Team Quebec’s William Gagnon while Colesen Faunt of Team Alberta/Northwest Territories took third.

“I didn’t expect silver actually,” Ellenwood said. “I was ranked fifth going in (to the finals, after preliminaries) and finished second with a big personal best.”

Overall, Ellenwood said it was really fun competing at the Legion championships and an exciting experience. “It is a big meet and all the provinces are there, which makes it great,” he said.

Ellenwood, who enters Grade 10 at Langley Secondary next month, won a pair of gold medals in the 400m and 800m races this past June in the Grade 8/9 division at the B.C. high school track and field championships, which were also held at McLeod Park.