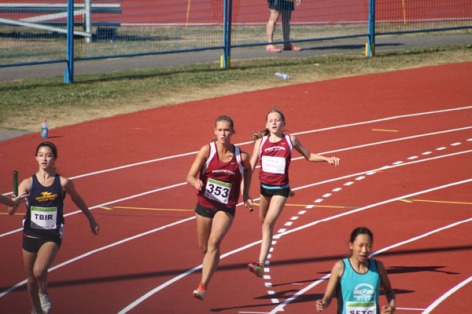 Penticton Western News – Surpassing personal bests was the focus for four members of the Penticton Athletics Club during the 37th Legion National Youth Track and Field Championships in Langley Aug. 7 to 13.

Haven Dufty finished fourth in the triple jump as she leaped past her previous best of 10.81 metres to finish with 10.92. In the long jump she placed 11th overall.

“Anytime you can go to a national and set personal bests, it’s just a tremendous accomplishment,” said Blair. “That is when all the pressure is on you. If you can do it in those, you know you’re progressing. Absolutely exciting to see.”

The relay team consisting of the Dufty sisters along with Megan Avery and Zoe Simourd placed fifth. They broke their previous best time of 54.49 by posting 53.88 seconds. Achieving a personal best was especially important in the relay said Blair because it’s an event the athletes didn’t work on a lot.

“This is only the third time they have run together as a team,” said Blair, adding that it’s a great result for a group going up against under-16 teams.

Haven said she performed the best she could.

“The other athletes were amazing,” said Haven, who also placed 15th in the B finals of the 200-m hurdles. “It was just astonishing to watch them jump.”

Being at the Legion National Youth Track and Field Championships was a great experience for Haven, similar to last year in Prince Edward Island. Haven said being there was nerve-wracking and exciting.

“I’m very happy that I was able to have a personal best at one of the biggest meets of the season,” said Haven.

The Royal Canadian Legion, producers of the Legion National Youth Track & Field Championships for the past 73 years, will hold the event August 2013 and again August 2014 in Langley, British Columbia. The Championships will be hosted by the Ladies Auxiliary of BC/Yukon Command.

As hosts, this year will see many new dimensions to the Championships with a pro-active promotional campaign.

The objective is to build a Championship alumni archive and they are looking for information, pictures, testimonials, quotes, videos and interesting stories from current and former members of the Legion Track & Field Clubs.
CLICK HERE for more information
Additional information page posted through Athletics Canada news bulletin

Comments Off on Call for Canadian Athletes’ Statistics, Testimonials and Pictures / Videos |